Getting back on line

It's been quite a while since my last post - time flies when you're having fun. A lot has happened, but I had not taken the time to write about any of it until now. I'm going to try to get back into the habit of writing here. Here's some headlines...

An ode to the thin client 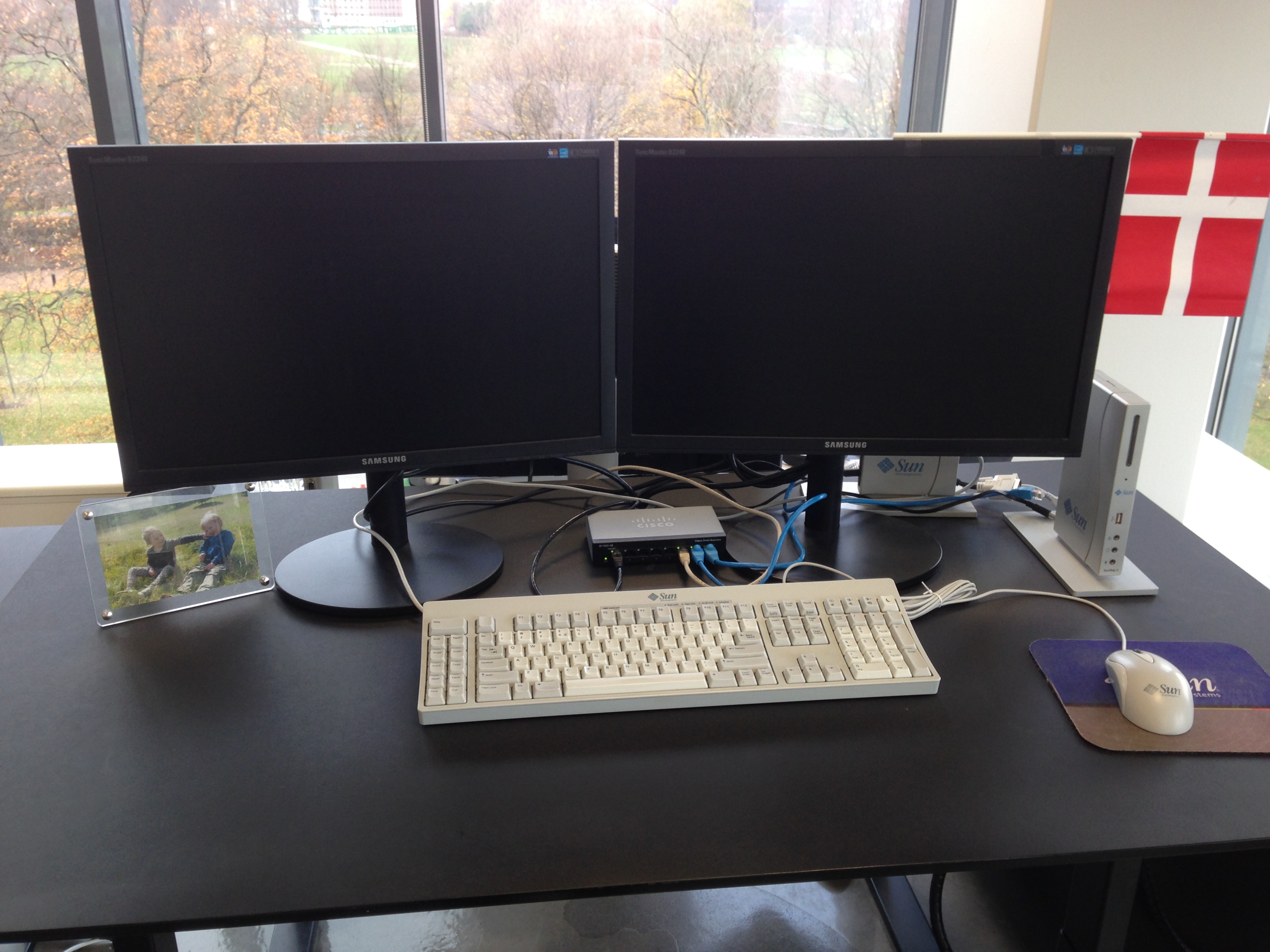 I've been an extremely happy user of the Sun (now Oracle) SunRay thin clients; both running with on Solaris- and Linux-backed terminal servers. I have up until late last year used a dual-head setup with two SunRays (one driving each monitor) since around 2002 or such. During those 13 years, the back end servers have been upgraded in various ways - ultimately, we ended up with virtual Linux servers running in a lage VMWare cluster backed with Oracle ZFS appliances. So my "desktop computer" (the SunRay server in the datacenter on which my applications ran) had more cores, memory and disks that would fit under and over the desk in my office.

The single big downside to this setup was video (as in full screen motion picture) performance. Everything else worked very well indeed - the SunRays accelerated 2d operations just fine so regular screen updates, scrolling, moving about and browsing the web was absolutely fine. Since my job isn't watching full screen video, this one limitation in the setup was not really a problem (sure, on fridays when a colleague links to a funny youtube video, it can be annoying to have to view it windowed rather than full screen - but really, this was the one downside for me). All in all, while we all like full screen video, I could perform my professional duties on this rig just fine.

There were some significant upsides to the setup - among the big ones I should mention: I had an identical setup at home - so all I had to carry from and to work was a small smart-card, my user session would follow the smart-card. Sometimes I run to work (it's a nice 10k jog), and all I needed to carry was a smart-card. No laptop can compete with that, however lightweight.

Also I never needed to worry about backups and hardware upgrades. My "desktop" computer was hooked up to a large storage system in the datacenter and other people would manage that - no unreliable or slow or too-small disks for me to worry about.

Anyway - since apparently everyone else (even nurses and doctors in hospitals) must be able to play full screen youtube while at work, the thin client has been discontinued by Oracle. In my opinion this is a shame - not so much that they discontinue the one true thin client product that existed (the X terminals died long before this) - but that IT people around the globe failed to realize the enormous savings a true thin client architecture does indeed provide in workplaces where thin clients are adequate graphically and where the ever-alive session provide massive savings in man-hours (saving personnel from starting and logging on to 5-8 different applications like they do in most hospitals in this country for example, every single time they need to enter a single data point about a single patient). 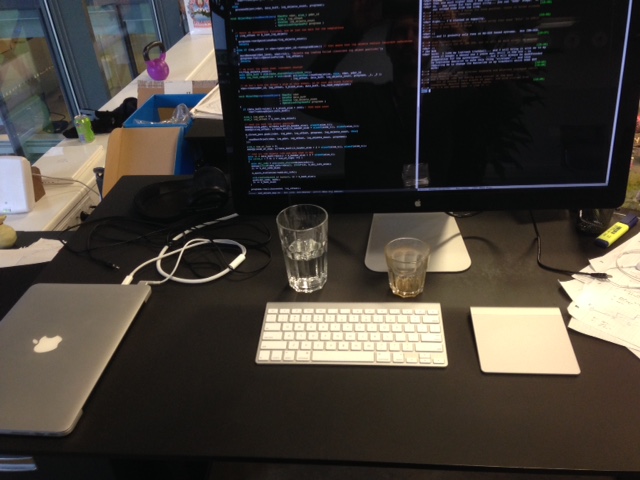 I can work with a lot of things, but I can't work on a discontinued product for many years - time to move on. I need a UNIX workstation, I want something that "just works", I want to be able to carry it around (bring it home now that my session can't travel with me any more) and while watching full screen Youtube still isn't part of my job, it would be great to be able to do that too (actually, CSS transitions on modern web could take a toll on the SunRay video performance too). So I chose a Macbook with a Cinema display for the office, as well as a bluetooth keyboard and trackpad. This way, when at the office I have a big screen and a normal keyboard and trackpad - when at home, I can work from the laptop.

I have not yet run to work after making this switch; clearly a 13" macbook is going to be a lot heavier than the smartcard was. We'll see how that goes... But aside from that, I really don't have any complaints. Emacs works in full screen mode just as well as it did on the SunRay, and that's where I spend most of my day anyway. Finally, I do love how full screen Youtube plays on this new rig.

The second big thing that happened to me since last update is that I'm now doing a significant part of my professional work in Common LISP. Yup that's right - the language that was invented (or "discovered" if you will) in the late 1950s. I guess that deserves some explaining too.

I was faced with the challenge of having to run some "business processes" for a cloud service we're building. I've seen these things being built many times before and I know how it goes: Someone needs a mail to be sent out in some particular situation - so one developer hacks up a piece of Perl to do that and runs it from cron. Now someone needs to pull a report of some numbers, so another developer cooks up some Python to compile the numbers and a shell script to feed the output to the right location. And so it goes... Each of these individual processes is seen as too small or insignificant to warrant a properly structured approach and before you know it, you will have developed both a messaging, reporting, billing and operations automation system using at least five different languages (bash, perl and python (probably at least two incompatible versions of python) happen within weeks, then follows a java service (everybody needs those) and that guy who learned Ruby needs to use that and then the web developers figured they could write stuff in JS and run it under Node.js). Look me in the eyes and tell me that's not how it goes. Every. Single. Time... Not out of ill will, but because everyone wants a quick solution to a simple problem. Unfortunately, 10 quick solutions to just as many simple problems isn't quick at all and ultimately isn't really a solution.

So we don't want that. I've implemented a complete automated billing and invoicing system in PL/PGSQL in the past - that was a great experience but I don't want to do that again either (lessons learned). I've also implemented such services in C++ - and while that's my main language, I just really don't think this is a productive experience. The abstractions you can do in C++ are fine, but still, for such diverse jobs as mailing, accounting, reporting and communicating with dozens of systems, I find that in C++ I end up having to type a lot (regardless of the number of libraries I may be able to use). Worse, the continuous testing and incremental refinement of a big distributed and inherently parallel system using the "edit compile run" cycle is terribly inefficient. A massive focus on unit testing will help here, but it will not cure the fundamental problem, that re-starting the full application on every change you need to test there costs a lot of time, every time, all the time.

I was seriously looking at other languages - including the hypes of the day (Ruby and Python as far as I remember). But the thing is; these languages are so close to all the other languages. There's nothing you can do in these languages that you couldn't reasonably do in either Perl or C++ too. Sure, you can pull out some contrieved example that would demonstrate some superiority - but you would not be able to solve most real world problems significantly more elegantly, or be able to develop the solutions much faster. All these languages are the same... They look the same, and they fundamentally build on the same ideas; pile a fixed set of features into the language, add libraries for commonly needed functionality outside of that. And that's it. And everyone uses the old "edit compile and run" cycle. Is that really the best we can do?

It turns out, it's not the best we can do. LISP has two absolutely huge benefits over "all the other" (non-LISP) languages:

These two points basically means that: Especially the second point is probably not going to make much sense to you if you don't know LISP already - and if you do, you don't need me to praise it.

Some time has passed now and we run a good number of important business processes on this LISP system. It was definitely a gamble when we decided to start this experiment - I did not know the language and no-one else on the team did. You won't find many people who know the language - but hey, when hiring C++ developers I generally don't find many people who know that language either (I mean really know it). Compared to the traditional approach where you have a myriad of small components each written in their own language, I far prefer our structured single-language approach here. This system has been a huge success so far - I cannot imagine how much code and how much time had been needed, had we chosen to do this in PL/PGSQL, C++, Python or any other of the "traditional" (but younger) languages.