I signed up for the Stamina12 race some time ago, wanting to try my luck at a solo 12h race. Due to various circumstances (family, job, selling house, lots of excuses) I did not actually train for this though. I had my training well thought out, but it just never materialized. A month before the race I seriously considered just selling my entry because I was so ill prepared, but in the end I decided to give it my best shot. 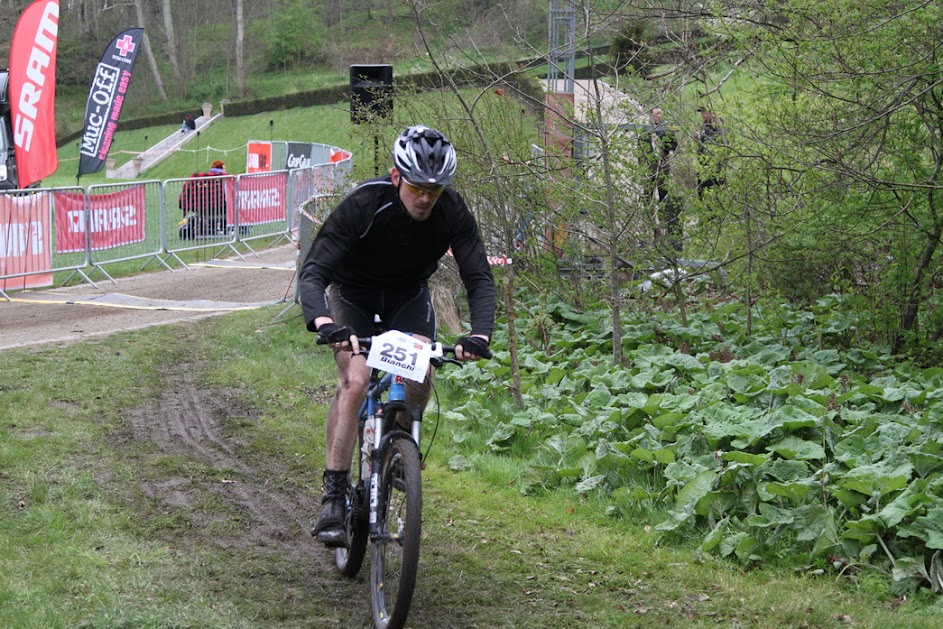 Well so I did, this saturday. I ended up number 68 out of 113 which, considering that I called it quits after 6.5 hours on the track, is not as absolutely terrible as I feared it would be.

So why did I chicken out early? Especially my upper body was simply "spent" and I started making really silly mistakes and taking falls where I should be perfectly able to ride safely. There were other factors (which I will get back to), but my own safety was the primary concern. I do not race for a living, I race because I like to.

I have raced before, just never a 12h solo. In the past, my main trouble has been with the bike, not with the body. This time I was better prepared than ever before - on the mechanical side - and I believe that my bike could have made it through the full race.

Here is a list of things that helped and stuff that I just got right:

I rode with two 750ml bottles on the bike, one with High5 4:1 Citrus and one with Summer Berries. This worked well as each lap took about 50 minutes, so I needed slightly more than one bottle of drink. I stayed hydrated the whole time (after about 2 hours I had one lap where I drank almost two bottles in less than 1 hour. It felt like I was not well hydrated, but after drinking extra, all went back to normal and I was fine). I brought plenty. Shorts, shirts, anything. It was so good to be able to adjust after the first few laps. I even packed an extra pair of bike shoes, just in case I would lose the cleats off of the first pair. The bike had almost new brake pads front and rear, but after six hours most of the rear wheel brake pad was gone so I would probably have needed to put on new pads, had I continued much futher. I had brought two sets of extra pads and the necessary tools so this would have been no problem at all. Since I run my Edge 800 with backlight always-on, it goes through the battery a bit faster than the 15h claimed by Garmin. After 7 hours on the battery was down to about 10% but since I brought a fully charged "powermonkey", I could have charged the computer (while riding) over a couple of laps. This would have been no problem. Or eight hour cream or vaseline or whatever you prefer to use to be able to continue to sit down and pedal. I brought it, I needed it after three hours and it absolutely saved the day. Some pain is ok and some pain isn't - this is one that is easily avoided. To protect your eyes - always ride with glasses. For the first time ever, I raced without tools on the bike. Since a lap was less than 1h I figured that any adjustments or brake pad replacements etc. could be made in the pit. Since I run "flatless" (tubeless with sealant) a flat is very unlikely, so I chose to bet that I would not need tube, pump and tyre irons. The only "common" problem left is a broken chain - I chose to believe that this would be unlikely too. For this race, I was right on all accounts. I never needed a tool on the track and I was happy not to have to carry them around.

The following are issues I need to address next time:

This should be obvious, but really, if I wanted to do better, I should have been in better shape. I lived off of High5 "Citrus" and "Summer berries" 4:1, and switching between the two keeps me going for a long time while still feeling that the taste is ok. But after more than 6l of this stuff, I really wanted something else. Something milky or "soft" that does not upset the stomach too much. Maybe chocolate? I drank a "For Goodness Shakes" recovery drink (which contains milk powder) and it tasted absolutely fantastic at this time... Maybe I should just down one of those every four hours? I should bring coffee too - I really could have used a proper cup of coffee (not just nutrition with added caffeine). I train with an HRM strap every time and it works flawlessly. But after 1.5 hours in this race, the HRM transmitter gave up and I was left to my gut feeling at how hard I was pushing it. This was a setback as I really rely on the numbers when I know that I am pushing my limits. Things just feel differently in a race too, so having the numbers are fairly important to me in order to pace myself (keep the heart rate down - force myself to go slower than I intuitively would otherwise). I should stop the timer when in the pit and then I should use the "elapsed time" instead of the "time" field on the computer - that way, I would still see the elapsed race time when on the track, but when analyzing my laps post-race I would see the correct lap times instead of the lap+pit times. Some people coat their shorts with this stuff before they ride. This is something I need to test, I think... I have a 3l (lobo) but I only just got it, have only ridden with it for a couple of hours, so I did not want to use it for the race. However, I did lose a bottle (without noticing) on a bumpy descent during one of the early laps and this would not have happened with a Camelbak of course. I need to figure out whether I want to ride with a Camelbak or continue with the one or two bottles on the frame (which have worked well for me so far). I took a fall on a gravel road riding almost 40km/h very early on in the race, simply because I was not paying attention to where I was riding. It was a very stupid mistake which could and should have been avoided. I was lucky and got away with just cuts and bruises - but this race was in a forest and hitting a tree at that speed would not have been pretty.

The quick statistics of my race are:

For me this was a fantastic race. I would like to have done better (of course), but I gave it my best shot and I learned some valuable lessons. Next time I will do better.