Tech stuff of all kinds
Archive for February 2012

Packaging with the Solaris IPS

I needed to package some software for Solaris 11 and of course wanted to use the Image Packaging System, IPS, the new package management system that replaces the old SVR4 package format that Solaris 10 and previous releases used. To the casual observer, it looks like IPS brings "easy" package management to Solaris - it is now possible to quickly search for - and install - a package from the internet, and updates are easily retrieved as well. This seems to work smoothly - just like on Debian for example - which has had this functionality for more than a decade... Well, better late than never!

Since the system is not just new, but quite different from what it replaces, I started looking for primers and tutorials to figure out how to get started. A word of caution: IPS does things differently, and there are some tutorials on the net which attempt to fight IPS instead of working with it - this leads to complicated and silly ways of building packages the wrong way, and this will cause problems for your end users. What you really want, is to go to the official Oracle documentation and read the developer guide which is well written and does a very good job of explaining why IPS is different and walks you through an example of creating a package.

So far, I am fairly impressed with IPS - it is the first packaging system (and I have used quite a few - from DEC Unix and HP-UX to NetWare, Debian, Red Hat, Windows and what have you) where I did not have to script to create a user account. Scripting, by the way, is disallowed by IPS for the simple reason that you cannot validate a package if the installation executes scripts because you cannot (generally) validate the result of a script. Instead of using all the provided tools for generating manifests from older packages, I simply wrote the .p5m manifest files myself and generated .p5p repository archives from them. In the future I guess I should make sure the repositories are on-line, so that the users can get their software updates along with the operating system updates when they run pkg update.

I have been biking a lot the past few years, but I have not been running much. In fact, I have almost not been running at all. Because of the biking, I'm in reasonably good shape (resting heart rate in the 40s, body fat below 15% and so on) but I just cannot run. My legs just won't do it. It hurts, especially the days after a run. So, I decided to go ahead and start running regularly.

In order to fit everything into a tight schedule, what I can do is, that I can make two weekly runs - one in the morning and one in the evening, on a single day of the week. The run will be 8.4km in each direction (to and from work). That's it. Clearly, running twice a day on a single day of the week is not going to be an optimal training schedule by any stretch of imagination, but this is that I have to work with.

The reason for this post, is the rapid change I experienced over the first four weeks (four times two runs). I have put some key numbers in the table below.

Personally I was very surprised to see the numbers change this much over just four training days (two sessions a day, one day a week, for four weeks). Due to illness I have had to skip two weeks, so it will be interesting to see how much damage that did, and how the numbers will progress from there. I would expect the average pace to stabilize first, and see the energy efficiency continue to grow further. I am curious by the way - what energy efficiency do you have as an experienced runner?

Making a roomba negotiate a doorsill

Having just become a Roomba owner, I was faced with the challenge of wanting the robot to negotiate a slightly large doorsill in a narrow doorway, as the robot should move form the livingroom to adjacent rooms. The manual says that you should lave at least 1 meter of open space from the front of the lighthouse - but this is difficult when the doorway itself is less than one meter. Second, the doorsill is a two-step construction with a 2cm climb followed a few centimeters later by a 1cm climb.

By default, the roomba could not reliably pass the sill. It frequently got stuck on the 2cm climb, and it bumped into the side of the door frame opposing the lighthouse.

To allow the robot to better negotiate the 2cm climb, smoothed it out a bit with a ramp. This is a proof of concept - I will make one that fits better and hopefully matches the colour of the floor or sill, but I needed a prototype quickly. 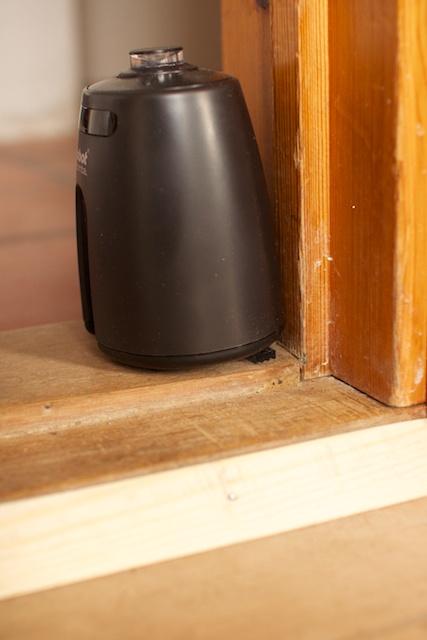